Visiting Disneyland Paris can be very expensive, especially for families who live in North America. It is cheaper for Canadians to travel to Walt Disney World or Disneyland than it is to fly overseas.

However, like many Disney enthusiasts, my family hopes to be able to visit all the Disney parks in the world one day – Disneyland Paris, included.

Here are some ways to save money on a Disneyland Paris trip:

There are always deals for Disneyland Paris available. Whether it be a percentage off rooms (if you decide to stay at a Disney hotel), free nights or free dining, be sure to always research what is available online directly from Disney.

My family always books under one of these promotions and we save hundreds of dollars.

Like the rest of France, food at Disneyland Paris is not cheap. It is one of the most popular complaints people talk about on the forums I read.

If you’re staying at a Disney owned hotel, fill up on the free buffet breakfasts before heading to the parks. All hotel stays at Disney owned property include continental breakfast – coffee, juice, pastries, yogurt, cheese etc. 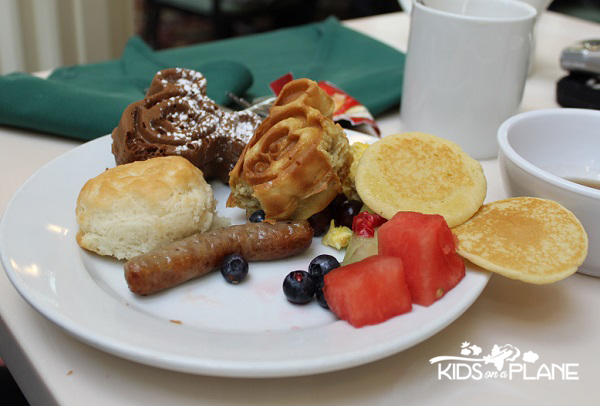 One way to save on food is to skip a 3 course meal at a table service restaurant which can easily run 30-40 euros per person and go for a counter service meal (fast food counter meal) which would set you back about 15 euros a person.

Most of these counter service restaurants offer combos which include a main course, side item, drink and sometimes a dessert. It is a great way to maximize your dining budget and the food portions at some places are quite large and shareable.

Another way to save is to bring your own drinks and snacks from outside of the parks. This is allowed at all Disney theme parks and really helps with reducing food costs as kids love to snack often!

From my research online Disneyland Park can take up to 2 days to tour and Walt Disney Studios Park 1 day.

If you purchase tickets for 2 days or over you automatically get the “Park Hopper” or “Passe-Partout” option meaning you can hop between the two parks as often as you like.

There are several park ticket deals online which run for a limited time so instead of paying full price at the gate, I would highly recommend purchasing park tickets in advance.

Everyone knows that souvenirs are expensive inside the park. One of the cheapest souvenirs are pressed pennies and there are machines around Disneyland Paris where you can make and add to your collection.

Fly into Another City

Paris’ Charles de Gaulle International Airport is one of the most expensive in Europe so if you are planning on visiting Disneyland Paris it might be cheaper to include a park visit as part of a longer European vacation.