After waffles for breakfast and a quick latte from the original Starbucks in Pike Place Market, my sisters and I walked what seemed like an eternity for an ice cream lunch. Yup, no such thing as dieting when you’re on vacation.

With four locations and an ice cream truck, Molly Moon’s Ice Cream has been bringing joy to Seattle with their unique flavors made with as many local ingredients as they can get their hands on (lavender from Sequim, sugar from Idaho, organic fruits etc). Even the chocolate that’s used in the shop is from Theo Chocolate – a Seattle based company that is the only organic, fair trade chocolate factory in North America.

My sisters and I spent a good half an hour in the store (which was packed by the way just like the shops we visited previously – we must have picked some pretty popular places to visit!) deciding on which 2 flavors we would split amongst the 3 of us. Yes, we could have gone for one pint each I suppose but decided there wouldn’t be room for a healthy-ish dinner if we did that. 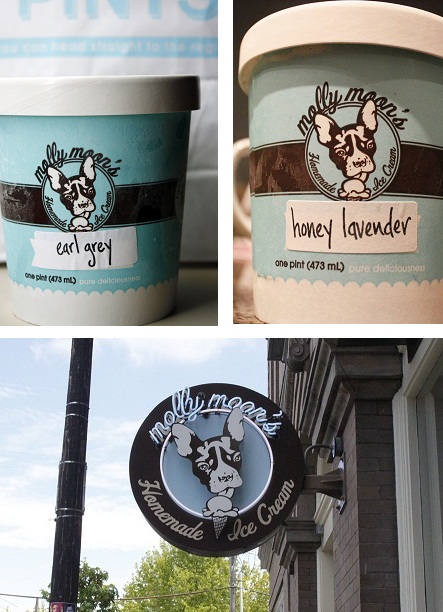 We eventually went with none of the above and bought 1 pint of Honey Lavender and 1 pint of Earl Grey.

O-M-G! As soon as I had the first spoon of Honey Lavender (which we decided to eat at the park across the street from the shop because we couldn’t wait to get back to the hotel room) I could not stop. Not too sweet which was a much needed change after the breakfast I had only a few hours ago. I loved the subtle hint of lavendar – wasn’t powerful enough to overtake the honey but you could definitely taste that it was there.

Earl Grey was just OK in my opinion. Tasted just like the tea but in ice cream form :). We only bought it because one of us (not me) is an Earl Grey tea drinker. I am more of an Orange Pekoe kinda gal. Maybe I should suggest that as a flavor? I digress.

I have never seen so many different varieties of donuts in my life. Over 40 of them! Top Pot Doughnuts are all made from scratch and trans fat free.

Here is what we ended up with. I don’t even remember what we bought and couldn’t tell you what flavors are in the box below but I will say that I really liked the simplest doughnut best – glazed cake. None of the doughnuts were particularly light – texture was like a combination of a cupcake and a doughnut – and we barely made a dent in them that night. 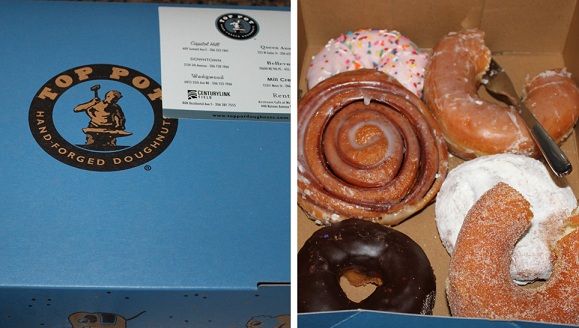 5.5 doughnuts were enough to last the 3 of us for 2 more breakfasts.

Oh Seattle. We were so spoiled. I have not had ice cream in 6 months. I lied. I’ve had the occasional green tea and black sesame ice cream after sushi lunch or dinner but other than that… nada!

*Love ice cream? This post is part of the Celebrate travel blog carnival: A Salute to Ice Cream.