Disney’s Pop Century Resort is one of Walt Disney World’s Value Resorts – the most affordable category of hotels owned by Disney.

My family stayed here for 3 nights after our 4 night Bahamian cruise on the Disney Dream.

We chose Pop Century Resort because our mission after splurging on a Disney cruise was to find a hotel on a budget with complimentary transportation service to the parks. 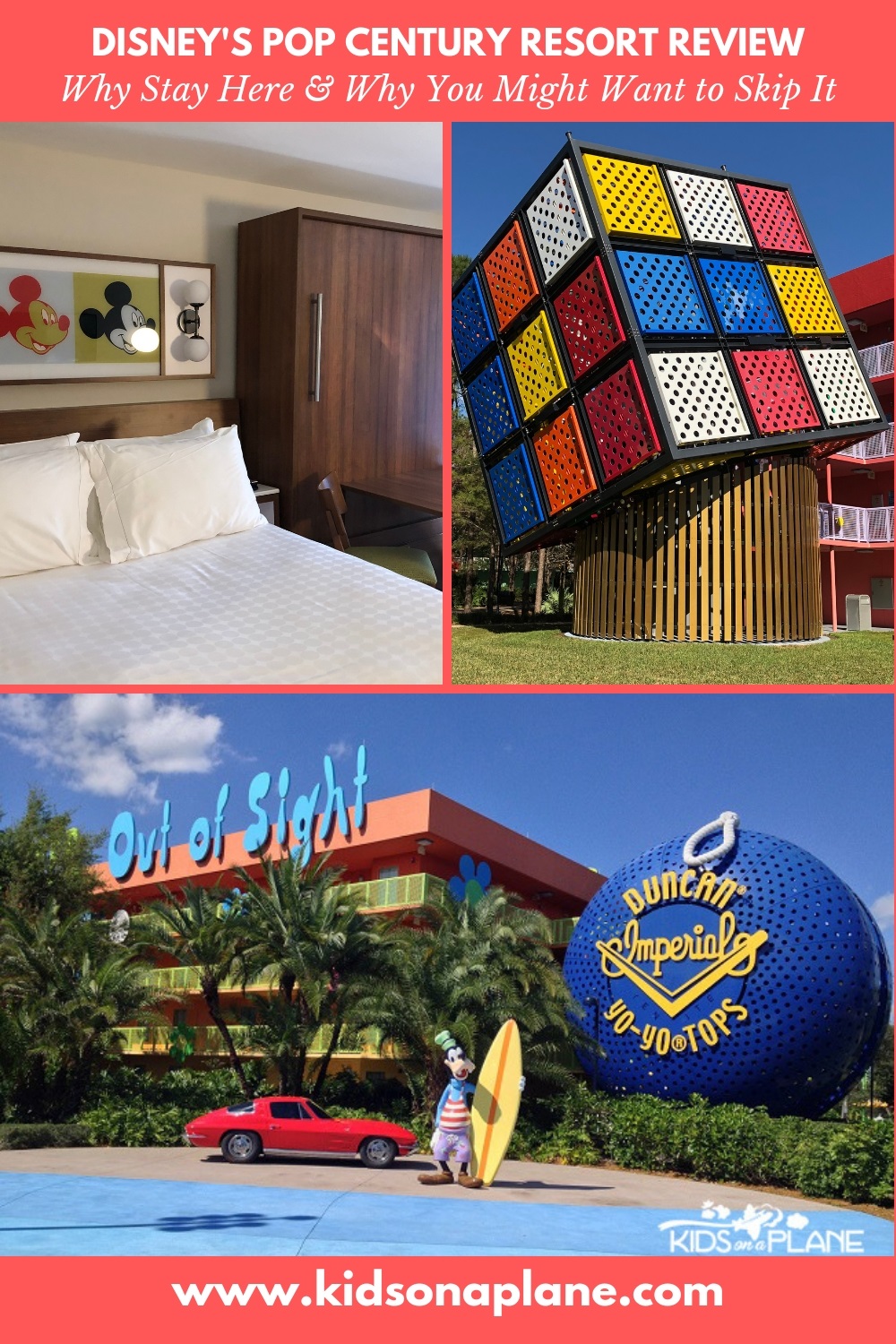 Each building has huge icons  such as a jukebox, Play-Doh cans, a cellphone and sayings on the top of the buildings representative of that decade.

Each guest room is 260 square feet and non-smoking. You can choose from rooms with either 1 king bed or 2 double beds. Handicapped accessible rooms are also available upon request.

The rooms are decorated to match the theme of the decade of the building you are assigned. 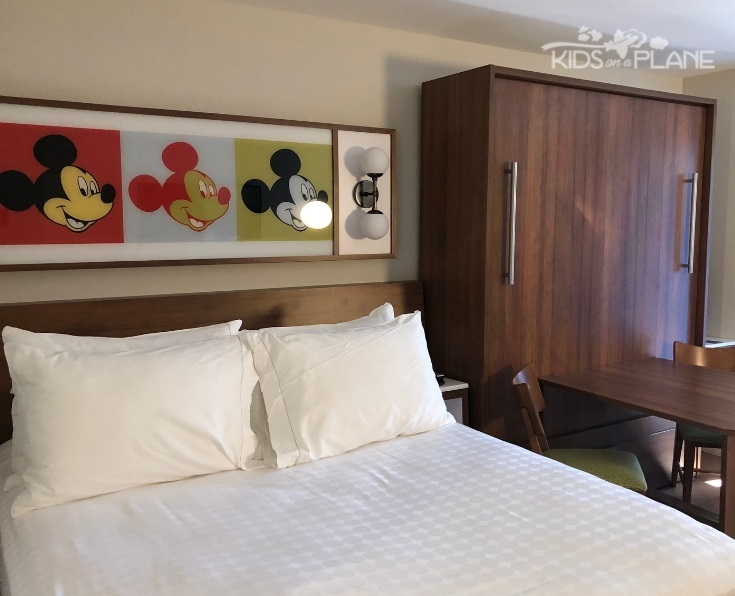 The standard rooms will be at the back of the resort. It’s not a big deal if you have a rental car and can park close to your building but it could be a very long walk if you’re using Disney buses.

There is a small charge for guests wanting a preferred room. Instead of being near the back of the resort, guests who pay for a preferred room are situated closer to Classic Hall or have a view of one of the pools.

For our stay we did the lowest priced option available. A standard double bed room in the 50s section of the resort right behind a towering Lady (from Lady and the Tramp) statue.

Our room faced the parking lot and took us less than 5 minutes to walk to the main hall. This location was very quiet at night which we appreciated.

Disney hotel rules allow 4 guests per room and you can add 1 complimentary infant pack-and-play (play yard) if needed. If you have more than 2 adults, Disney charges a fee of $10.00 per night per additional adult.

Everything Pop is the food court located in Classic Hall.

Open from 7:30 AM until 12 midnight each day, guests can go there to eat breakfast, lunch, dinner and snack time. 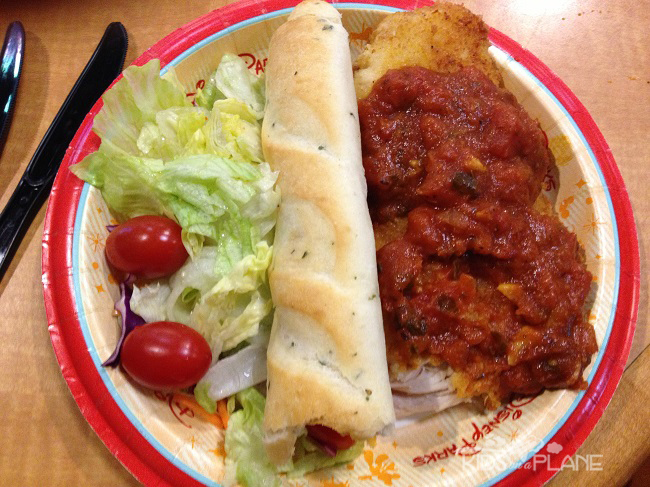 The eating area is huge (it should be with close to 3000 guest rooms!) with lots of tables and a kids area – toddler size tables and chairs, a colouring station and TVs playing what else – Disney Channel shows.

During our stay, the “Everything Pop” Food Court be constantly busy. About 75% of the seats were occupied at close to midnight when we visited one night (not to worry – my in laws were watching the kids).

Breakfast time was definitely the busiest as everyone was getting ready for a day at the theme parks or Downtown Disney.

Unlike Moderate or Deluxe category resorts, Pop Century not have a formal “sit down” restaurant. 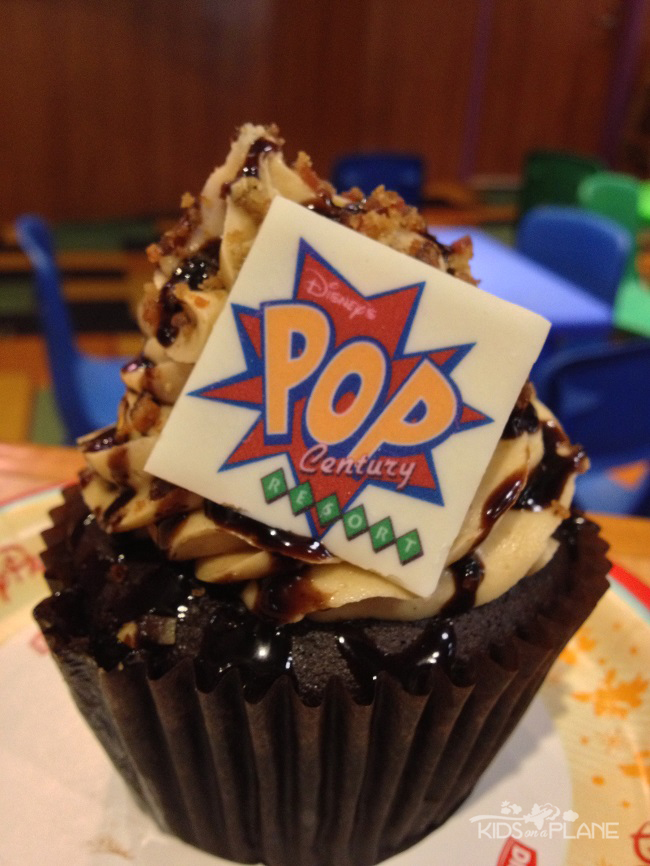 Everything Pop’s menu offers a wide range of dishes (sushi, burgers, pasta, pizza, and American classic comfort food) and is great for those who don’t have expectations of fine dining type fare.

What really stood out food wise was their desserts. Pop Century’s famous tie-dye cheesecake and the King Bacon Cupcake were the highlight of the trip for me. 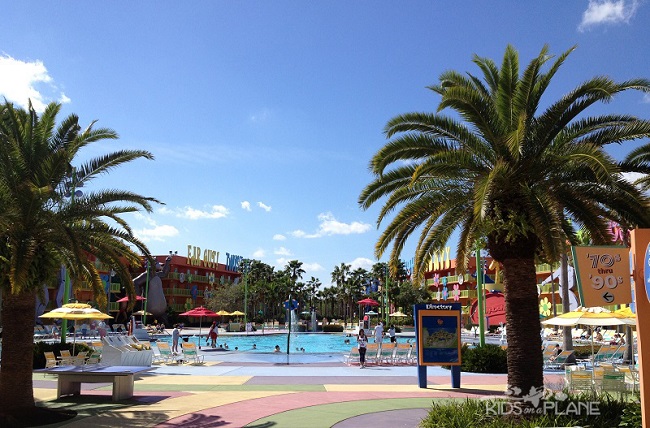 We spent the majority of our time in the bowling pin pool as it was located just outside of our room and our kids were often the only kids in there along with a few adults. If you are looking for some relaxing quiet time by the pool, I would highly recommend hanging out here over Hippy Dippy. 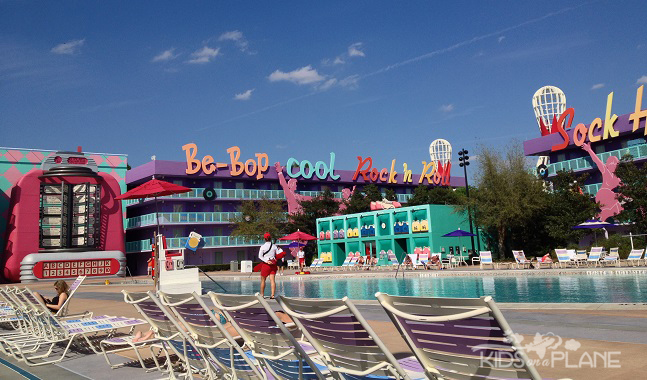 Complimentary life jackets are available at each so there’s no need to bring one from home.

During the day they have Disney trivia, games, dance parties and arts and crafts at Hippy Dippy pool.

Pool-side movies on a blow up screen are also shown every night near Classic Hall (the main lobby).

Guest laundry facilities are available next to the 3 big pools and cost $2 per load for both washers and dryers.

If using Disney transportation, all travel to and from Pop Century is via bus at the front of Classic Hall. 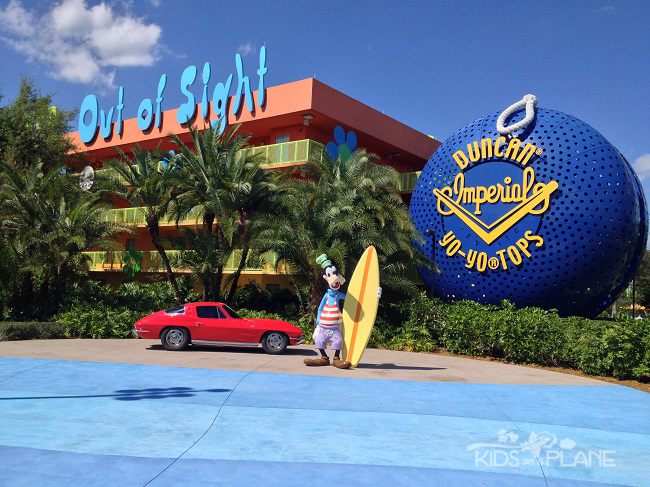 Crowded & Noisy  – Because this is a Value Resort, it can get very crowded and noisy during high season and rooms fill up quickly during promotional periods (room discounts, free dining).

Large Resort – If you want a room located close to the food court and main lobby you will have to pay extra. Pop Century Resort is a very large resort and getting from one end to the other end of the resort may be difficult for some guests.

Small Rooms – At 260 square feet, we found it comfortable for our family of 4 as our kids are quite young however, I don’t think it would be spacious enough for 4 adults. If you’re just in the room to sleep, then maybe it would work.

Long Lines for Buses – Even when we went in early March – not high season – we found it to be quite busy and the lines for transportation and a table in the food court were much longer than we had anticipated! We waited for 45 minutes and 2 buses passed before we were able to take one back from Magic Kingdom to Pop Century. And this was 8PM at night, not even closing time at MK. 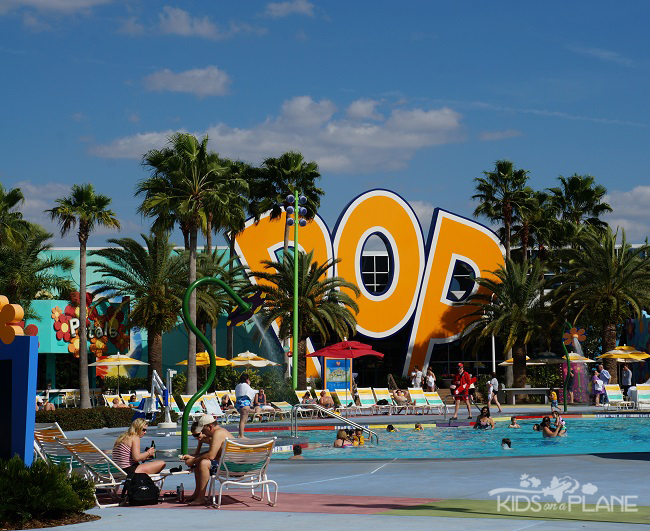 Located Next to Art of Animation – Pop Century is  located right next to Walt Disney World’s Art of Animation. Being able to walk across to AoA was wonderful as we had another food court option for meal time.

For the Budget Conscious – Pop Century is good choice for families on a budget and those looking for a room with basic amenities.

Multiple Pools & Activities for Kids – The on-site activities and multiple pools are great for keeping kids entertained should you plan a non park day during your Disney World vacation.